Your FREE lesson is below and the PDF is on the way!

That PDF was just sent to the email address you signed up on. Double-check your promotional or junk folder and whitelist the email address if you haven’t already done so. Really simple instructions on that here

Start the lesson below
​
Just scroll down to get started on the lesson!

The best way to start a new skill you’ve learned is to put it into practice. Start writing some new chord progressions and feel free to share with me what you’ve done!

There was a moment in time in music history where functional harmony started to take a turn from Western Art Music Theory’s explanation (roman numeral analysis, cyclical progressions, etc) into harmony that became harder to define. Functional harmony hangs around key or tonal areas that move in either:

These motions can belong to the key (diatonic), be closely related to the key (non-diatonic) or borrowed from parallel modes (modal interchange). There is a list of some of the most common functional harmony motions in the Functional Harmony Options PDF (that was just sent to your email).

Non-functional lacks a noticeable key area or has a progression that moves in a non-functional way. Some of these movements can include:

Stop and read through the Functional Harmony Options PDF!

Clearly, the list of functional harmony options isn’t a complete guide to every possible combination. There are hundreds (if not thousands) of potential groupings one could make. However, I want to focus on two different ways you can combine the options to expand your harmonic progression. This is very similar to building structures with legos. They can fit in a variety of these two ways:

The video below shows a very simple way you can combine them (using a recognizable standard). This does use the ii – V7 – I as an example, but you can use ANY progression in a similar manner to get amazing results! 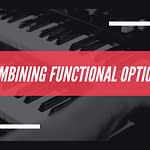 You may be wondering, I thought this was a Jazz composition lesson?

You are correct, but these common progressions found in pop and rock music can add some familiar or expected with some non-functional (or unexpected). They can be added in to a formal division (like an ‘A’ or ‘B’ section) or be an entire section itself. Great composers find ways to add elements of current popular music into their music without making it cliche. Most of the Jazz standard repertoire was, at the time, popular music. If it worked for them – it can work for us!